Black Panther’s World Premiere Los Angeles, California. Our black limousine van with leather seat pulled up onto Hollywood Blvd. A few short walk and we were led to will call, where I spotted Garcelle Beauvais. Be still my heart!! 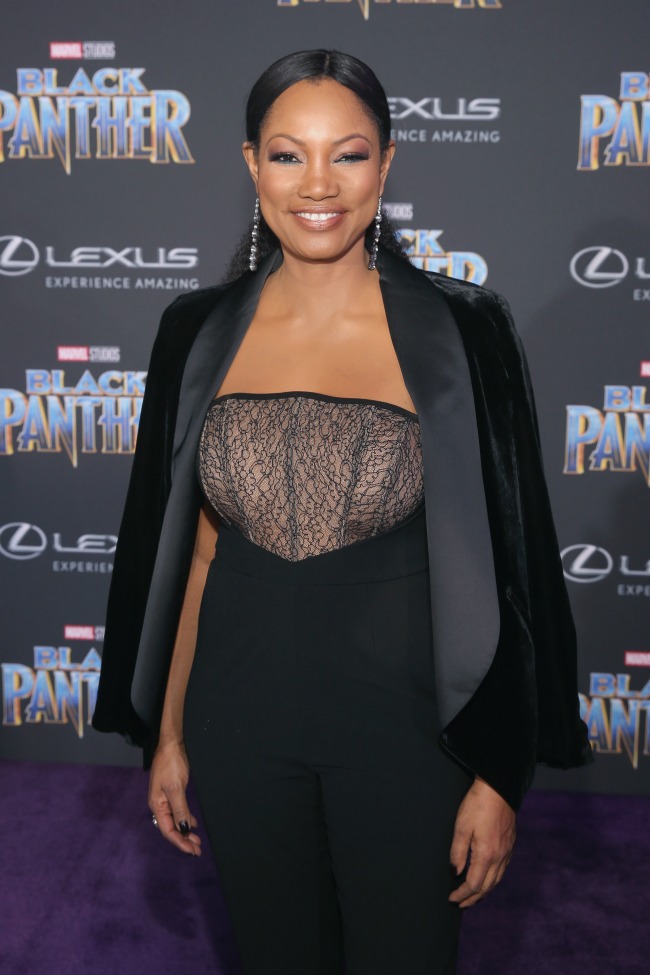 at the Los Angeles World Premiere of Marvel Studios’ BLACK PANTHER at Dolby Theatre on January 29, 2018 in Hollywood, California.

Before I could say anything, she’s whisked away not to be seen again.  As we stood at will call our credentials were handed out to us then we were ushered onto the purple carpet. Lights, Camera Action!! Click, click, click – camera flashes and screams from adoring fans trying to get the attention of their favorite celebrities. It’s loud, vibrant and exciting.

Countless time, I have watched from the comfort of my couch as various news outlet brings us live coverage of movie premieres in Hollywood. But here I am right in the middle of it all, wearing a blue off shoulder custom made African dress. 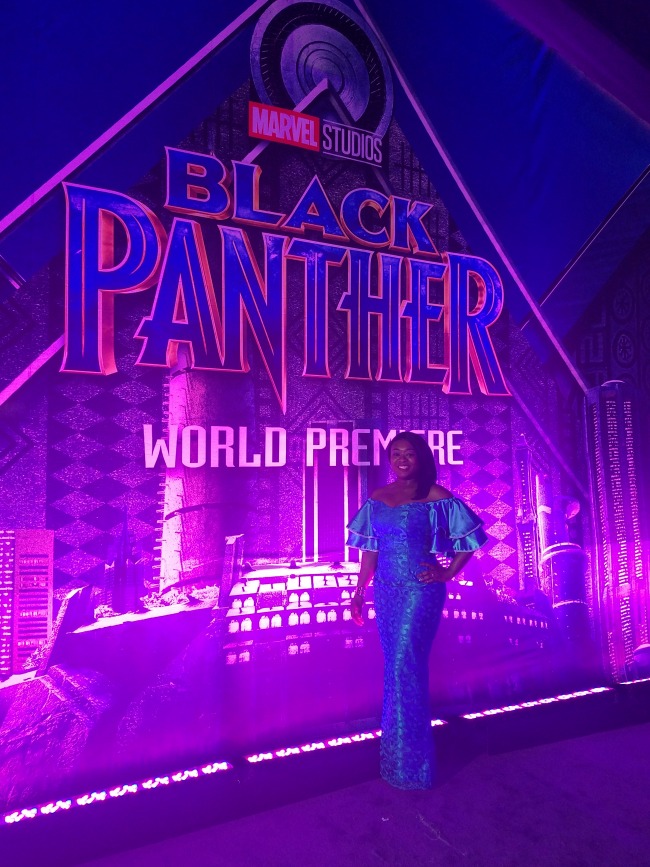 Getting to attend Marvel Studios’ Black Panther’s World Premiere on Monday, January 29th was unexpected but very much appreciated. The premiere ticket was in high demand; and to be among the few people who actually got a chance to not only watch the movie but also walk the carpet. That right there, will go down as one of my favorite moments to date.

At the end of the purple carpet was the entrance to the Dolby Theater, where the movie was being shown. We walked through security where our phones were put in a pouch, afterwards we were seated and patiently people watch and await the start of the film. 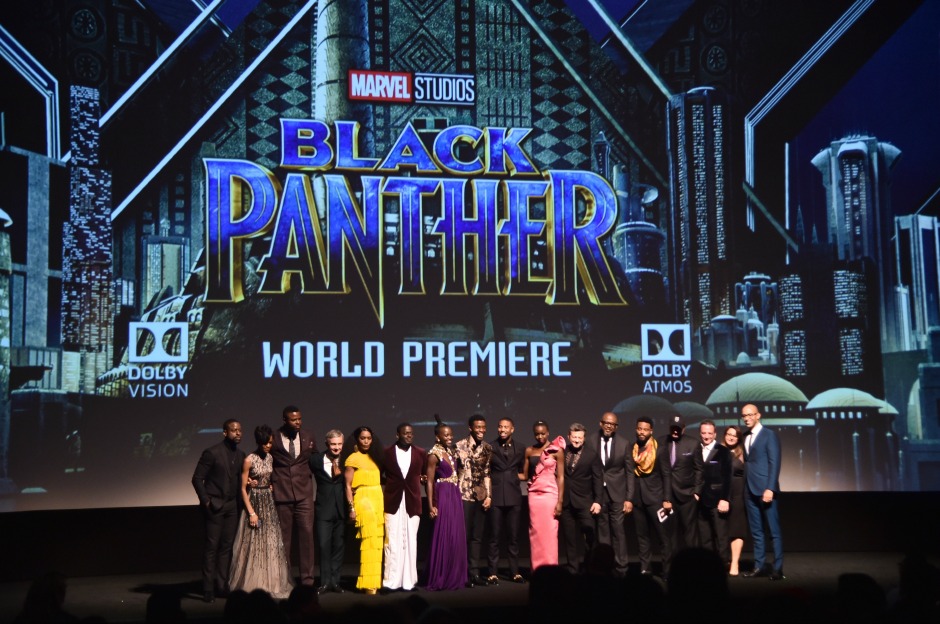 at the Los Angeles World Premiere of Marvel Studios’ BLACK PANTHER at Dolby Theatre on January 29, 2018 in Hollywood, California.

The energy in the theater was infectious, everyone had a smile on their faces. It was as if we had a part in creating history. To further prove how amazing the whole event was, the moment Angela Basset walked onto the stage, everyone got up and applaud her with a standing ovation. Why you ask, because not only was she a part of an amazing film but because she is a well-respected icon. 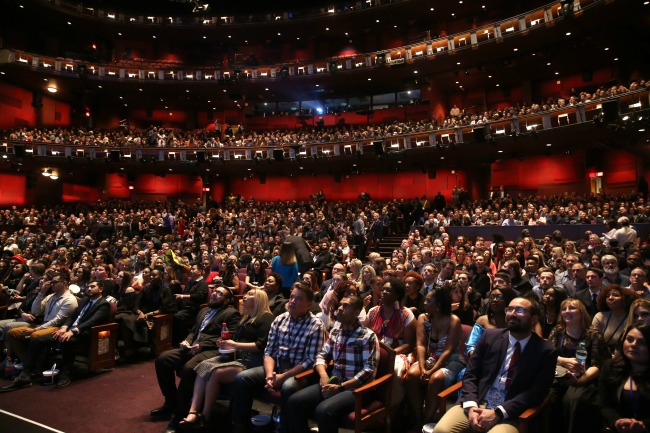 Plus to be in the same room as Chadwick Boseman, Forest Whitaker, Daniel Kaluuya, Bozoma Saint John, Kendrick Lamar, Mike Colter, Janelle Monáe, Meagan Good, Jamie Foxx,  Yara Shahidi, David Oyelowo, and a host of others. The magnitude of that night isn’t lost to me. 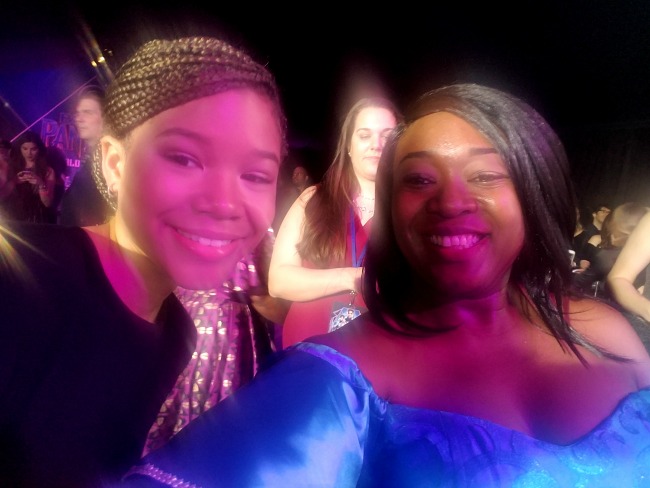 On the red carpet with Storm Reid from upcoming film, A Wrinkle In Time

At the moment, I can’t say much about the film but to walk the carpet and be among beautiful people showing off our love for African culture, walking the carpet with our heads held high, while celebrating the beauty that is Africa. That is a moment I will forever cherish.
BLACK PANTHER arrives in theatres everywhere on February 16, 2018! The sound track is currently available for pre-order.  In the meantime, feel free to get psyched by watching the trailer below:
Share
Tweet53
Pin1
Flip
Share
54 Shares
Continue Reading
You may also like...
Related Topics:featured