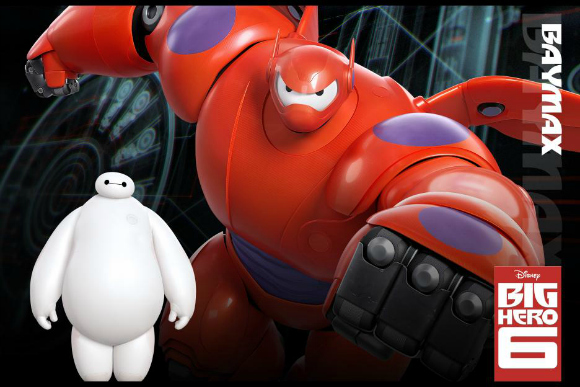 Disney’s BIG HERO 6 Trailer + Free Activity Sheets. On a scale of 1-10 how excited are you to #MeetBaymax. My family is pretty excited as well. Disney’s “BIG HERO 6″  is an action-packed comedy-adventure about the special bond that develops between Baymax (voice of Scott Adsit), a plus-sized inflatable robot, and prodigy Hiro Hamada (voice of Ryan Potter).  When the filmmaker started this movie, they wanted to create a movie that has a good mix of action, humor and emotion. They captured that well with the relationship between Hiro and Baymax. Says director Chris Williams, “The movie is really about the two of them coming together. We decided early on that the central relationship would be between Hiro and Baymax as Hiro struggled to deal with the loss of his brother. While we want the story to be really fun and funny, at the same time, there’s this emotional depth and resonance, that is pretty far beyond what people might expect.”

Disney’s BIG HERO 6 trailer:
Here’s a peek at the BIG HERO 6 Movie Trailer. Looks like it wil be a great movie, it’s produced by the same guy that worked on Tangled,” as well as “The Hunchback of Notre Dame,” “Hercules,” “Tarzan” and “Treasure Planet.”

Official BIG HERO 6 Movie Synopsis
From Walt Disney Animation Studios, the team behind “Frozen” and “Wreck-It Ralph,” comes “Big Hero 6,” an action-packed comedy-adventure about the special bond that develops between Baymax (voice of Scott Adsit), a plus-sized inflatable robot, and prodigy Hiro Hamada (voice of Ryan Potter). When a devastating event befalls the city of San Fransokyo and catapults Hiro into the midst of danger, he turns to Baymax and his close friends adrenaline junkie Go Go Tomago (voice of Jamie Chung), neatnik Wasabi (voice of Damon Wayans Jr.), chemistry whiz Honey Lemon (voice of Genesis Rodriguez) and fanboy Fred (voice of T.J. Miller). Determined to uncover the mystery, Hiro transforms his friends into a band of high-tech heroes called “Big Hero 6.” Inspired by the Marvel comics of the same name, and featuring breathtaking action with all the heart and humor audiences expect from Walt Disney Animation Studios, “Big Hero 6” is directed by Don Hall (“Winnie the Pooh”) and Chris Williams (“Bolt”), and produced by Roy Conli (“Tangled”).

9 Life Lessons I Learned from Oprah’s The Life You Want Weekend
Q+A with Celeb Chef Josh Capon and Tony Luke Jr. About #Peptocopter