“You are a good man with a good heart, and it’s hard for a good man to be a king.” If you’ve read my Black Panther review, then you already know that Marvel Studios’ Black Panther is about family.  This message also rings true as we sat down to talk to Academy Award & Golden Globe winner, Forest Whitaker who plays Zuri in the upcoming film. Zuri is a longtime Royal advisor to former King T’Chaka. He is also the shaman (spiritual leader) of Wakanda. With the death of T’Challa’s father, Zuri became a mentor and father figure to Black Panther bestowing his knowledge and wisdom onto him. Read on for an in-dept interview with Black Panther Forest Whitaker as he shares the powerful message he hopes viewers can take away from the film. Don’t worry,  there are no spoilers. 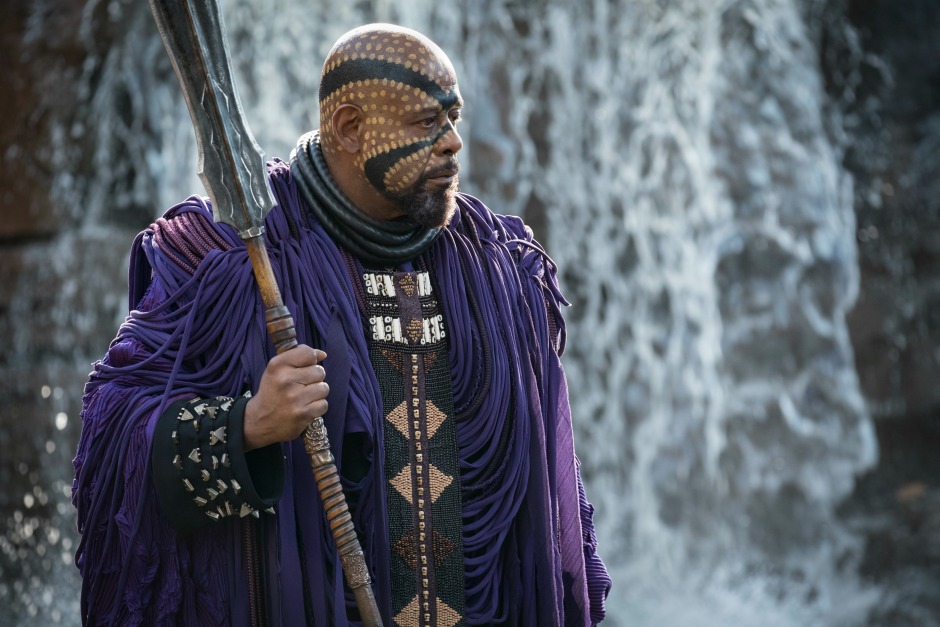 On mastering quiet performances, that leaves big impression.
Forest Whitaker: Yeah, I think it’s trying to have the right thoughts and internal life when all of that’s going on. And hopefully an audience can feel what I’m thinking, and what’s going on inside. That’s what I do, just to figure out what I feel, what I think.

On working on his first Marvel movie
Forest Whitaker: It was exciting. I remember when we were at the Wakanda Falls – it’s so overwhelming. It felt like this hundred-foot waterfall was falling all around us. And this pool of water. And we’re bringing him out, out of this ship, and just, it’s just massive. It’s a very powerful, powerful experience. But then what I did with Chad inside, I really got to the get inside the emotional heart of it, too. So it’s more complete than a lot of other experiences, in some ways.

On how his African roots influenced his portrayal of Zuri.
Forest Whitaker: I guess it did. Although the Jibara tribe are like the Igbo tribe. But, I didn’t fashion him around those two tribes. I fashioned him around different spiritual leaders, and different ways of trying to get the moral fiber for the community. Zuri is the spiritual leader of Wakanda, So just trying to understand that from different perspectives. 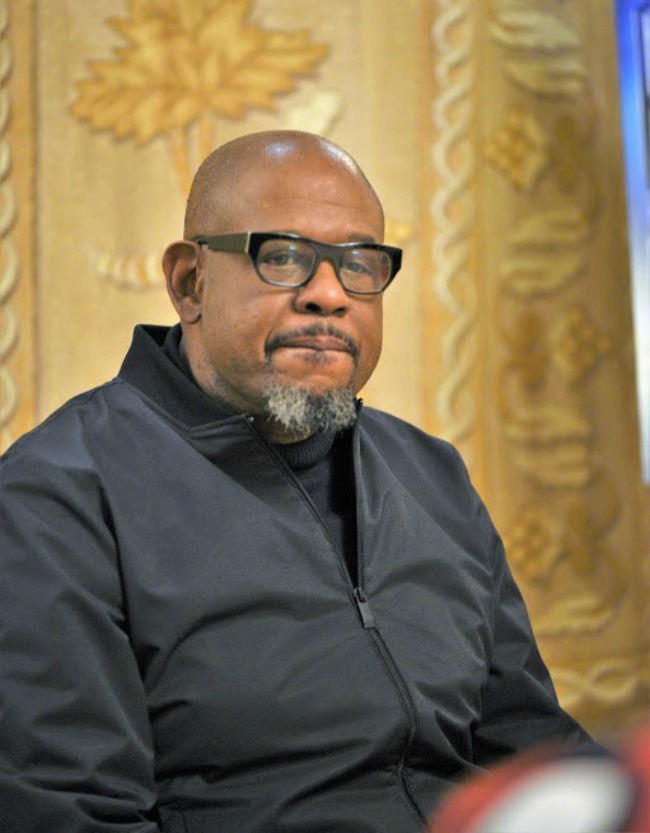 On being an integral part of the film.
Forest Whitaker: I knew when I read the script.  When Ryan first gave it to me, they wouldn’t allow me to look at the script. They just would talk about the character.

On Black Panther coming to the big screen.
Forest Whitaker: I think that the expression of it, I didn’t imagine exactly, but I imagined it having this kind of magnitude. I imagined it that way, not just from the comic book, but when Ryan said he was going to do it. I had a relationship with Ryan before. So, I knew him as a filmmaker, and as an artist, and I thought that something really special was going to happen. I didn’t know what exactly, but I definitely knew something special was going to happen.

On Black Panther being a departure from his usual work.
Forest Whitaker: Yeah.  It was.  I had just finished a film that was about the KKK, and it was a true story, and I was doing all my research and learning about what I needed to know to play this preacher.  I studied being a preacher, I studied to understand how to express myself.  I can’t compare the two experiences.  One was like, him, this guy, trying to like, protect his family in the South, and, like, having to deal with this Klansman that he brings into his home, you know, and so that becomes like, a very tight community.  Every experience is really different.  Every movie that I do, most of the time, is different, and then when it starts to get too similar, then I know that there’s something wrong.

If I can’t feel a little fear about it, and I don’t feel like I’m going to change or grow from it, then it’s something wrong.  Maybe I shouldn’t be doing it.  You know.  And then I have to examine the reasons why, whether it’s life or you know.  Whatever could be the reason. 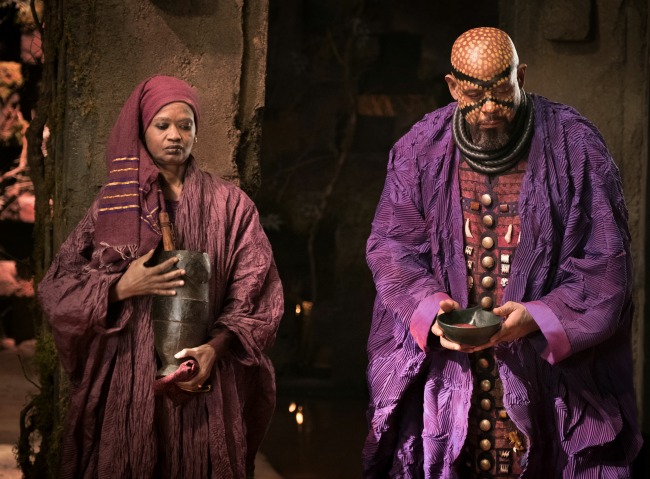 On being type-casted or pigeonholed as a serious actor.
Forest Whitaker: Oh.  I don’t know.  I like comedy, though. I was working on Empire. I had these comedic scenes. Yeah, a couple of ’em.  And so they were like, “Oh, you can do comedy.”  But I’d done a couple of comedy movies, I mean, I did ’em a long time ago, like when I did Rage in Harlem.

On the message he hopes viewers will take away from Black Panther.
Forest Whitaker:  That we are our brothers’ keepers, that even in our own comfort, be able to reach out and help others is important – One tribe. I think that’s important. I think the message of female empowerment – just both physically and mentally, and just the power that it expresses.  The message about our youth, and how we’re molded by our environments, and how we have to step in and try to move those things forward.

I think you know, there’s other messages too –  Colonialism, finding your own voice, empowerment.  Empowerment, particularly for people of color, but also for everyone.  There are a lot of messages in the movie, you know but those are some of ’em.

On his future roles and plans.
Forest Whitaker: Well.  I have a few films coming out,  Burden is one of them.  I just produced one, we just had at Sundance, called Sorry to Bother You.  I think we’re going to see that come out.  I did this movie about Desmond Tutu, where I played Desmond Tutu, and I’m just going to wait for it to come out. And of course, I’m waiting for this one to come out, and then Saving Steve McQueen.  So, I think I just need to sit still for a second.

It was such an amazing experiencing interviewing Mr. Forest Whitaker. He was very forthcoming and he seems like he genuinely enjoys acting. “Black Panther” opens in theaters on February 16. 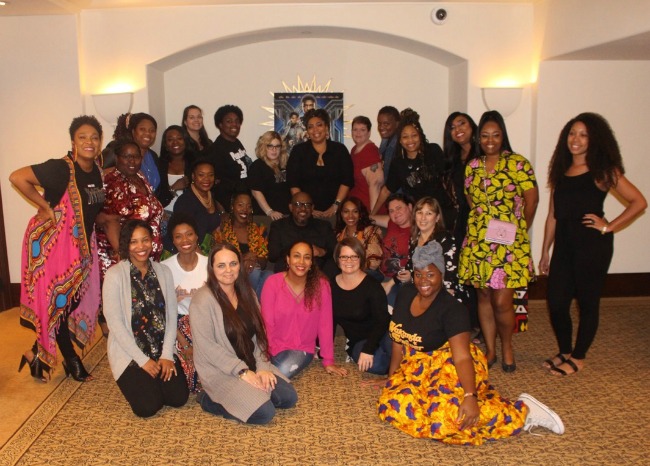