By now, I am sure you all know I am pretty hyped about the US release of Black Panther, set for February 16th. I love press junkets. And I have attended quite a few of them. However there was something about our Black Panther Interview with Daniel Kaluuya & Letitia Wright that made me feel as if these two could be my real life friends. Our conversation covered a lot of topics, Daniel Kaluuya shared a personal experience being referred to as the “lost one”. A term use to describe Africans children that are born outside Africa and they don’t speak or understand the language. Daniel is British-born to Uganda parents and he’s often considered lost because he isn’t “authentically” from Uganda because he can’t speak the native language. Personally, this is something I’m afraid my children will encounter. They are born in the United States and although they understand my native language, they can’t speak it the same way I can, which could potentially lead to them being ostracized within the African community, i.e. considered “lost”. 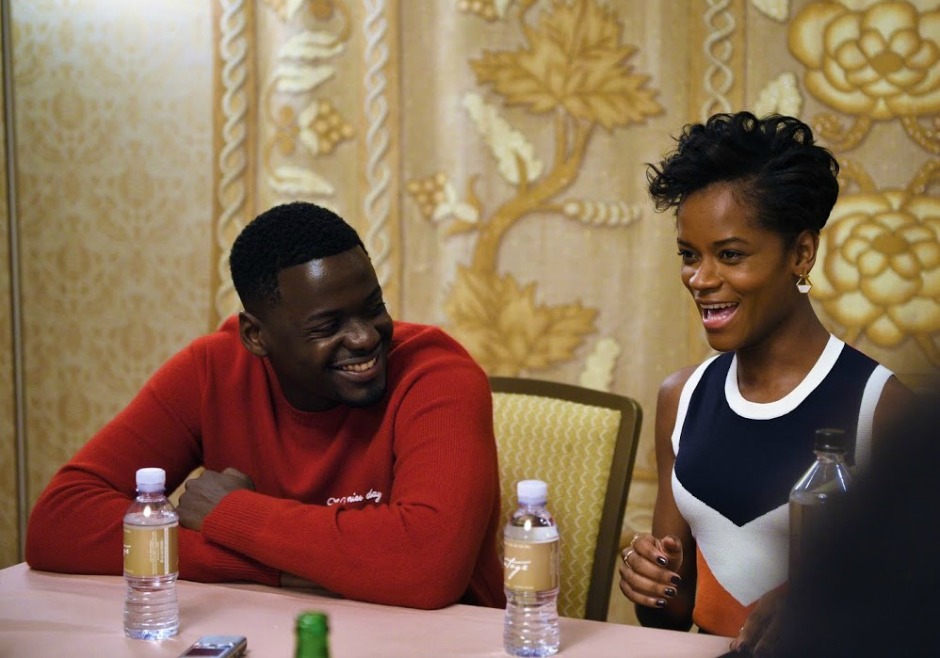 From the moment, these two walked into the room the energy shifted. With an infectious smile, Ms. Wright joked about taking her shoes off so she could be more confortable.  Both are new to the spotlight, which is probably why they were full of energy and easy to chat with. Daniel Kaluuya just received an Oscar nomination for his role in ‘Get Out’. Letitia Wright, Guyanese-born actress recently appeared in a controversial episode of Netflix’s Black Mirror. Needless to say, we had a lot to talk about.

Check out this clip of Shuri then read on for our interview with Daniel Kaluuya and Letitia Wright.

On how they both prepared for the physical demand of their roles.
Daniel Kaluuya: Well, we did a lot of sword training. We were in the black, we had so much sword training. I had to learn from scratch.  I think what was amazing, everyone had to have their own fighting style that reflects their character. So, W’Kabi is more like a fierce and ruthless. We learnt how to, based on certain style that were in the African community in Africa. And we were trying to have an hybrid of all these styles and we just worked in all these fights that we were working with. It was completely creative and in the moment. We had a well of knowledge and a well of training.

Letitia on her hair style for Black Panther.
Nikki Wright was the lady that created pretty much all the styles. They all settled on braids, which I never had prior to that. Ryan and Camille, the head of the hair department. And Nikki would come in and be like, ‘what are you wearing?’ and she would see rough pictures from Ruth and then she would go and start designing.  So, all of those things are like literally just people coming with ideas and Nikki as well just literally sleeping on it and coming in the morning like, ‘I got something’.  Even like the hero look for the gauntlets, she created that.

That’s like, she just, she did that.  The team was just sick and then now it’s on the face of dolls and stuff.

Daniel Kaluuya: Everyone’s hair style was different,  representing all kind of styles within the whole community. 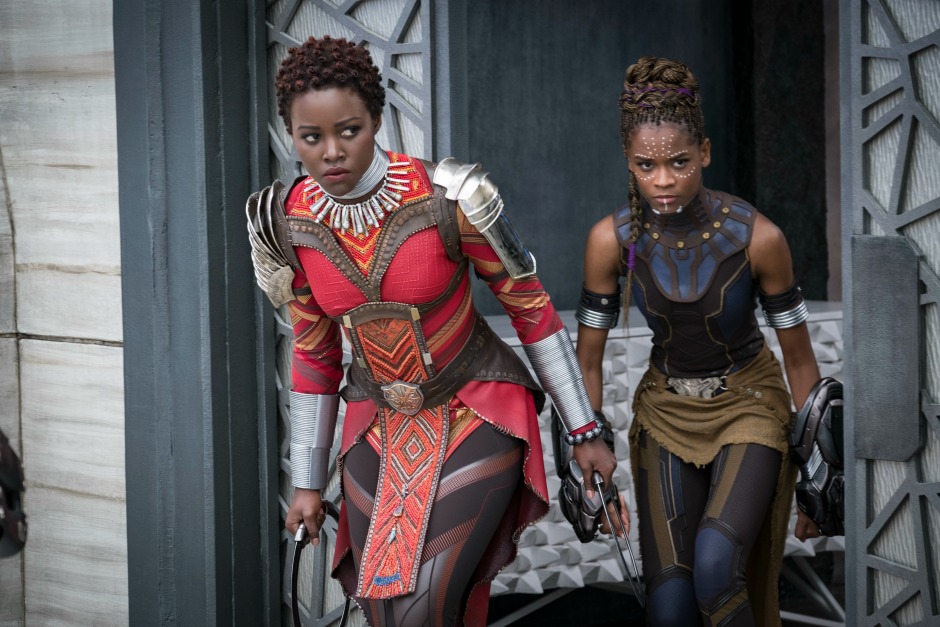 On staying in character while shooting the comedic scenes.
Letitia: You know what I didn’t even expect it. I didn’t even expect, I didn’t go in with the, with the thing that I’m gonna be funny. It was just like, it was down to the writing, the writing was so good and then also just going at home and really just studying the script. And then I would find myself coming up with stuff like, ‘she would say that,’ like, ‘she would say that and that’s mighty rude.’ And she took herself so seriously I guess that’s why it’s kind of funny ’cause I just went into it like.

Daniel Kaluuya: She’s the funny one. I think what’s amazing about Letitia’s performance in this film is that she’s honest. And then it’s, it’s about love, it’s about love for her brother. You clown your brothers.  You clown your sisters. She’s not trying to be, she’s trying to tell the truth.  And it comes across and everyone identifies with that. And it kind of like that playfulness and it’s a laughter from familiarity. Do you know what I mean because it’s like everyone knows Shuri. It’s the best kind of comedy for me ’cause it’s grounded and it’s about love, you know.

Daniel on the message he wants the audience to take away and what lessons he learned from shooting the film.
For me, I thought Kill-monger was one of the best villains I have ever seen.  ’cause it’s how he’s decided to deal with grief. You know like, what is there to do with pain. How you deal with pain,  really informs how you move forward. And it informs who you are and what you do and the energies and the people that are around you.  So, that kind of thought feeling like as black people,  everyday is pain, you know. 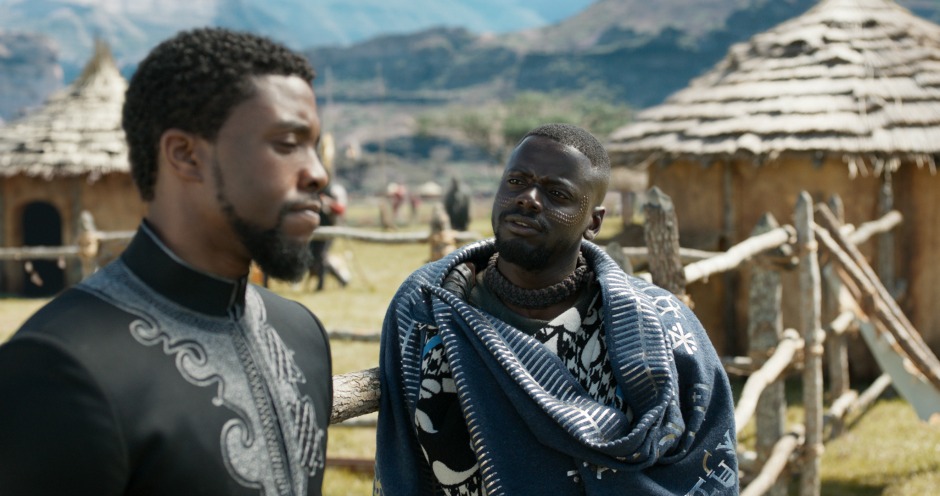 I think it is Vince staples that say, trauma is the currency of black people in the west. A lot of our films and a lot of our content is dealing with trauma.  A lot of our media narrative is trauma.  What’s amazing about this, it deals with this and it talks about these two roads, you don’t have to go down that road but also it’s not solely about it.

Letitia on playing an inspiring black princess on the big screen.
It’s crazy because this film is pretty much years of prayer.  And words are powerful,  because this is something I would pray when I was a teenager just getting into acting, like, whatever I do, I just want to be a vessel to be of inspiration. Doesn’t have to necessarily mean that that character is not flawed or perfect or has to be a perfect character but just to inspire. But, this opportunity, when this opportunity, opportunity came up, I understood the, the magnitude of Shuri in the comic books.  I understood where her arc is and where her journey is and it’s huge.  But, what I had to do was take her, a dose out of like Kendrick’s books and just be humble.  And just be like, ‘okay cool, don’t think like that. Don’t let that overwhelm you.

I understood what was gonna be happening, I understood the magnitude of the film, I understood that I’m standing with Daniel, Lupita, Chad, Ryan, like Michael, I understand what was going.  I could see what was going on and I could see what would be the result, so what I tried to do was just tell the truth and that something within myself I always try to do throughout my whole time acting.  Not been a long time, but just telling the truth and then knowing that as long as I do that and I do it to the best of my ability and I a vessel for that.  Then hopefully by God’s grace like young people will be inspired.  And also that’s down to the writing and down to, just a big collaborative thing with, with the writers and the, and the directors and the actors  and, just doing that and making it relatable.

So, that, I’m the vessel for it. I do it and if a kid can be like, ‘man I want to do science,’ I’m not trying to force it down your throat, it’s kind of like, I’m just gonna be the vessel and be real.  And be like, ‘science is cool, Shuri is cool, she can you know, create stuff and not be looked down upon,’ and just play the truth of that, of what’s going on.  And then, if it inspires people, then yes. I didn’t take the burden on of, ‘oh my god, I’m gonna be inspiring a lot of people.’  And, and I knew it was gonna happen.

But it was kind of like, going on set to be like, I’m gonna tell the truth today, she’s a scientist, she’s really cool and if you grab something from this, grab it and go.

So there you have it, our Black Panther Interview with Daniel Kaluuya & Letitia Wright. It was a pleasure to sit down and chat with these two. The love and respect they have for each others talent is admirable. I am excited to see what the future holds for them. They are both very talented and I hope we see more of them in the near future. 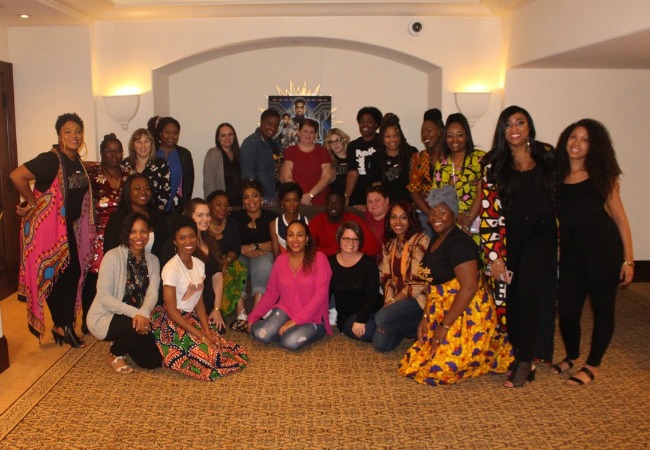 During the interview, Letitia reference taking a page out of Kendrick’s book, here is what she was referring to.  Want to know what I think of the film, here is my review.