Alice Through The Looking Glass starts playing everywhere tomorrow, so if you have some time take the whole family to enjoy this laugh out loud family film.

Interview with Mia Wasikowska – Alice Through the Looking Glass 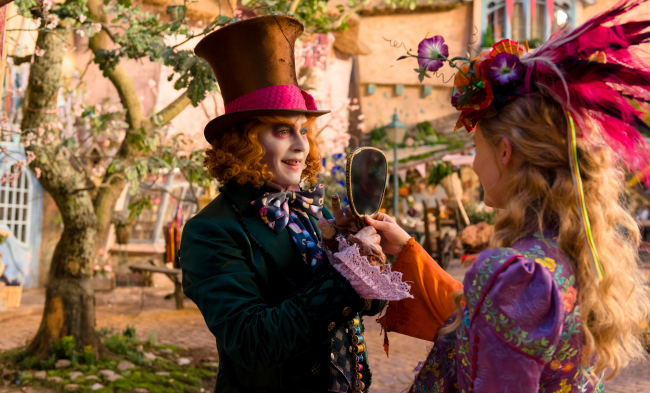 Alice (Mia Wasikowska) returns to the whimsical world of Underland and travels back in time to save the Mad Hatter (Johnny Depp) in Disney’s ALICE THROUGH THE LOOKING GLASS, an all-new adventure featuring the unforgettable characters from Lewis Carroll’s beloved stories.

On what her favorite part of the film was:  “Well, I think I really like the, oh, one scene I really like is when I see the hatter in the marketplace and I’m trying to explain to him that we’ve met, but when he’s older and I’m younger. I think that’s so sweet, and it’s got like such an essence of the original book to it, that whole abstract, quite bizarre nature of it. Yeah.” 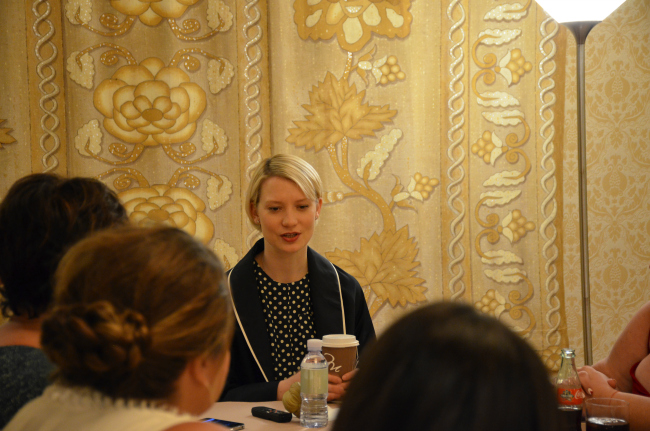 On stepping back into her role as Alice: “Yes, it was great. I really love Alice and I liked seeing her journey. I think in the first film she was still a little uncomfortable and trying to bridge that gap between knowing who she is on the inside and then being able to be that outside. I think that was sort of her journey in the first film and then this in this film she had just spent two years as the captain of her own ship, and she has a really strong sense of who she is and she comes back into this story with a really strong sense of that and despite the fact that the expectations of her are really low in her society. She manages to hold on to that sense of being worth more than what people want of her. Which I think it’s really great and important for young girls and boys.”

On sharing her favorite quote from the film: There are so many, but I do like the message of time. How it says, You can’t change the past but you can learn from it. I think very, even though we kind of know that I think really deeply understanding that is really important to being able it’s the best way to kind of live your life and be in the moment, accept what’s happened in the past and move on into the future openly and not be sort of fixated on trying to change something that has already happened.Which I think we can get a bit caught up in.” 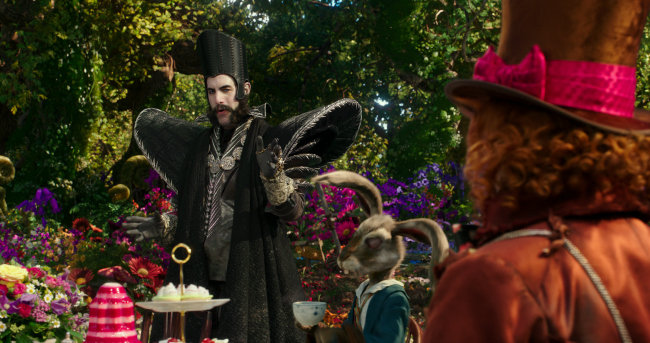 Sacha Baron Cohen is Time in Disney’s ALICE THROUGH THE LOOKING GLASS, an all new adventure featuring the unforgettable characters from Lewis Carroll’s beloved stories.

On her favorite relationship with other characters in the film: “I like a few of them. I do like the relationship with Alice and Time. I think Sasha plays like a confident idiot very well. He’s like this old, powerful  loser in a way, and like that Alice is the only one that kind of isn’t scared enough to pull him out on how he just doesn’t make any sense at all. I like that she sort of has no fear in approaching kind of anyone, especially him, because he’s gotten such a strong ego. And then I also really like the scenes with the Hatter. When you’re filming a film like this and it’s green screen for five months,  you spend a lot of time running around and jumping around. And so obviously the more enjoyable days was when it was those really lovely scenes between the two of us.  That was really nice.” 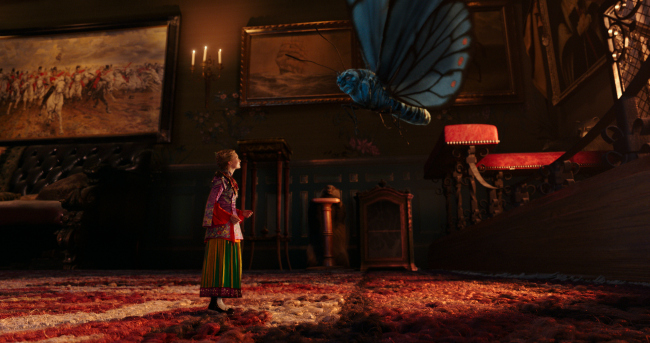 Alice (Mia Wasikowska) and Absolem (the voice of Alan Rickman) converse in Disney’s ALICE THROUGH THE LOOKING GLASS, an all new adventure featuring the unforgettable characters from Lewis Carroll’s beloved stories.

On the challenges she faced working with CGI: “Yeah, I mean even just like when you read the script and it takes like an hour and a half to read, and you’re like okay, so I do a lot of running and that then translates to like five months of running every day and jumping, and it feels quite physical. And so sustaining that level of energy and when you have quite little coming back at you, in terms of the set is challenging. It’s just a big green blob of light, and there’s not much. We had a few more sets on this film, which was really great, but otherwise, it’s quite like an abstract experience 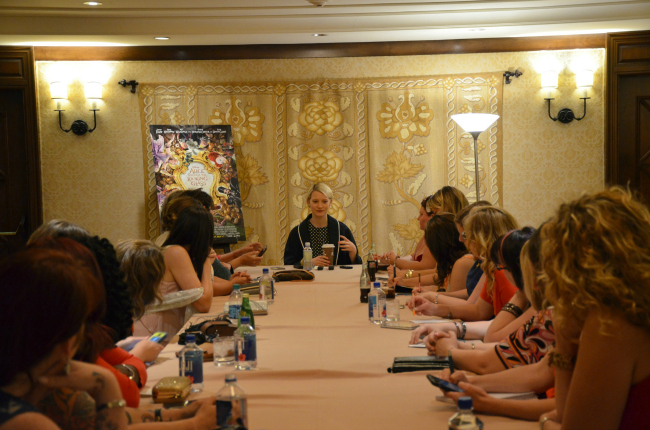 On her role in creating the costumes: “Yeah, a little bit. Colleen, with the design, is really brilliant and she did the first one. So I knew her and we were able to have a good dialogue about it, but I feel like she, in this film, I had more accessible like active kind of clothing. I mean, I had so many trousers, even when they kind of look like skirts, they’ve got a leg bit, which was really good and even having her in a captain suit at the beginning and the end, just a sense that she’s like more active and less kind of restrained in her gaudy dresses was quite nice.”

On Alice being a role model: “Yeah, I think just sort of what I said before of that, like having, she has like, seems to have this innate sense of who she is and even though she’s got all these challenges and people always kind of questioning her, she manages to hold on to that really strong sense of herself and even when she goes to the ball with the oriental costume and she just doesn’t’ even seem to notice the judgment coming off of everybody else, and that sort of just seems to roll off her back. So, I guess just that sense of not caring so much about what other people think, I think, is really important.” 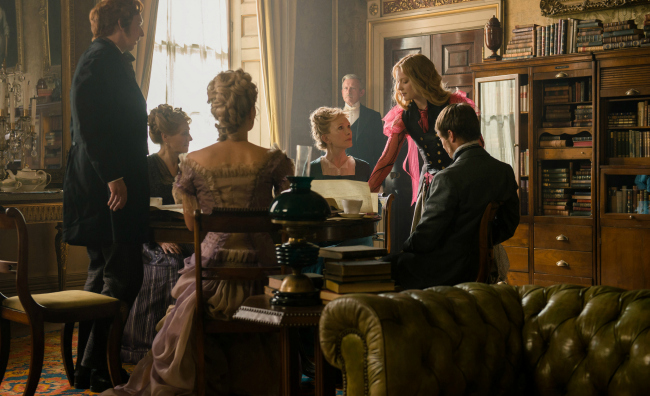 Alice (Mia Wasikowska) returns to the whimsical world of Underland in Disney’s ALICE THROUGH THE LOOKING GLASS, an all-new adventure featuring the unforgettable characters from Lewis Carroll’s beloved stories.Lindsay Duncan is Helen Kingsleigh and Leo Bill is Hamish.

On Alice being a tomboy with a take charge attitude: “Yes, I think so. I mean, I like that she doesn’t have that sense of femininity being a restriction to her. She still manages to be feminine and connected to that side of her without compromising anything, and I yes I like to think you can have both and not in a way that’s limiting to being women or to enjoy certain aspect of that. But, yes, I definitely go for comfort over sort of a style like her I guess.”

On training for her role as Alice: “I had a two-week period before we started filming with the stunt coordinators, which is really great.  They were really brilliant group of people.  But, yes, there’s no illusions to the fact that I did quite a lot of the physical stuff, but I had a wonderful like stunt double who did a lot of that really difficult, painful stuff.  So I would come in and do like the fun, whimsy bits, and then she’d be thrown across the room.

On what her character, Alice taught her about herself: – “Hmm, I guess you learn a lot of stamina. I think film world in general, sort of what I’ve learned is that the perception is different than the reality, I find that quite interesting. Like filming this is great, but it’s a lot of hard work and a lot of very long day.”

On how she spends her downtime: “I still live in Sydney, and I spend a lot of time in my home, and I have a very small garden, but I like love gardening and reading, and being with friends. I live not too far from the ocean, so I like to go for walks a lot, yeah, but pretty boring, pretty simple existence. It’s amazing. It’s pretty fantastic.”

On sharing the last book she read: “I’m reading at the moment, If on a Winter’s Night a Traveler, which is really good. And I really love the Elena Ferrante series, the Neapolitan books,  novels – anybody?”

On working with Johnny Depp: “It was great. I guess the main difference was just that I knew him before and with all the cast I had that level of familiarity with them and, that was really nice. So we all sort of knew each other and that always helps stepping into a project like this, which is quite abstract. He’s such a wonderful person, such a lovely, sensitive like person and I love that he’s so kind of creative. I mean, all his characters are very, very different, but they’re also distinctly his own characters. You always sort of know a Johnny Depp character and yeah, he’s great.”

On having mentors who inspire her to follow her dreams: I mean I have like some lucky friends and I’ve been super lucky to work with some really wonderful people in the film world and then also just making sure I keep connection with people in my life who’ve known me a long time that’s really important, I mean you know my grandma, my mother, my older sister. I mean they’re really important to me. And in the film industry, I think there are so many wonderful people. I think Julianne Moore is such a brilliant actress and I think she’s just done so well at doing really interesting film and also having a great home life. 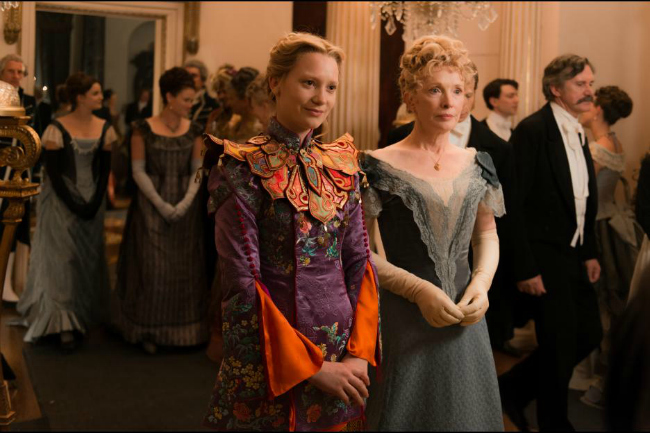 On the theme that resonated with her the most:  “I like that it looks at the relationships between all the characters a lot, like Alice and her mother, and the Hatter and his father, and then it looks at sort of like the root of the rivalry between the sisters. And, but you know, I mean, your own relationship with your mom like changes again and again as you grow older, and you go through different stages in your life and that kind of reestablishing that relationship and how that happens like constantly. Alice and her mom kind of learn from each other and are able to like appreciate each other again. It’s really sweet in this. I really liked that.”

On the genre she would like to work: “I would love to do maybe like some comedy. I think it’s really hard to find a good comedy. I believe there are a million great dramas every year but comedies, maybe are a tiny bit harder to find that one that feels really great and funny. So yeah, I would like to explore that.” 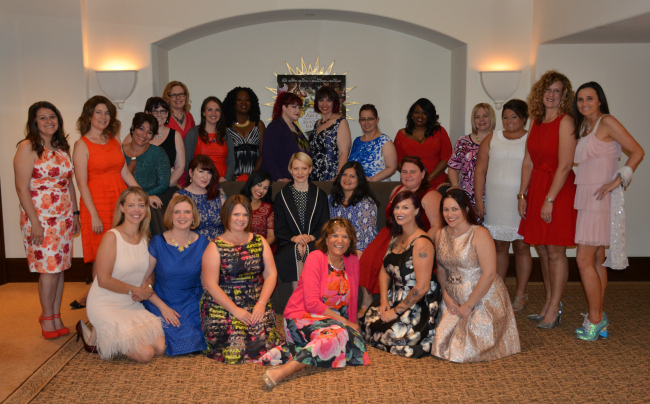 For more on my trip to LA and interview with the rest of the cast, check back tomorrow.