My Experience at Disney's 'Alice Through the Looking Glass' Premiere in LA: Things I Learned Walking The Red Carpet For a Movie Premiere – Afropolitan Mom

On Monday, I got a chance to walk the red carpet for Disney’s Alice Through the Looking Glass premiere that took place at the El Capitan Theatre. It all started a few weeks ago when I received an invitation from Disney to attend a 3-days press trip to Los Angeles. This would be my first time walking the red carpet for a movie premiere. I arrived in LA on Sunday, got a chance to have drinks with a few ladies on our team and went to bed early to get ready for the day ahead. At first, I was apprehensive about how I would handle the time difference, but luckily, I was able to enjoy my time in LA without any problems.  Earlier in the day, we had a sit-down interview with some of the people involved with the movie, and I will share that with you at a later time. 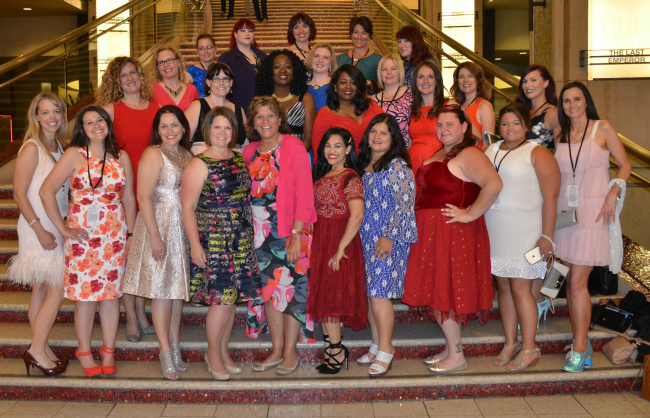 Our first stop was security check to pick up our badges; then we walked over to watch P!nk perform for a live taping of Jimmy Kimmel Live!. I have to say; she is an incredible talent with a down to earth attitude. One of the songs, she performed was Just Like Fire, off Alice Through The Looking Glass Soundtrack. I can probably recite all the songs on her first album, Missundaztood because it came out at a trying time in my life. Anyway, at some point during her performance, she brought out her daughter to say hello to the crowd. 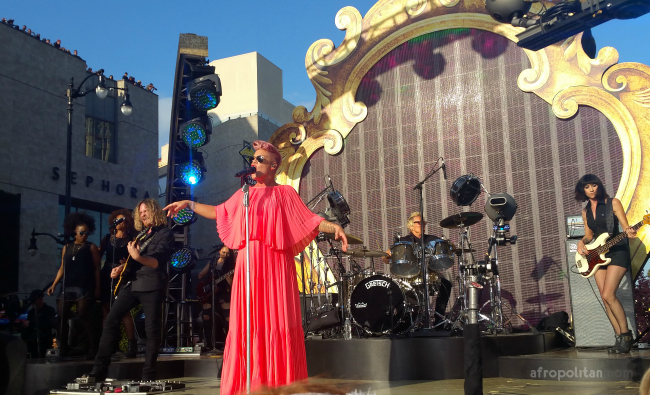 Oh yeah, here is a video of her performance, you might be able to spot us, or at least our hands.  We were in front on the right-hand side, screaming and waving our hands trying to get her attention.

Speaking of the crowd, I was surprised as to the amount of people that were there. I am not talking about the guest on the red carpet but the fans that were on the sidelines, anxiously waiting for their favorite celebrity to come by. It was insane; you could see people on the roof of buildings, and at nearby stores just trying to get a glimpse. 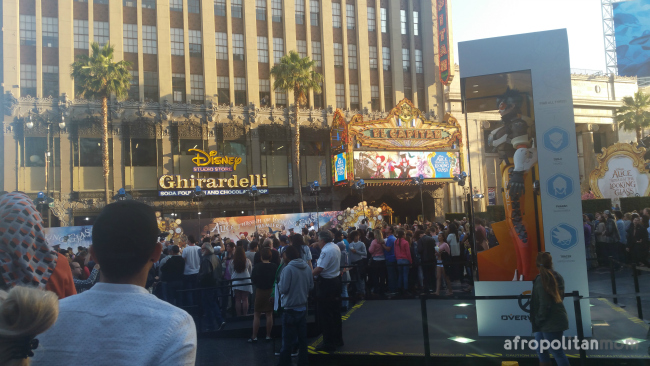 Here is a glimpse of the red carpet before they opened it up to everyone. 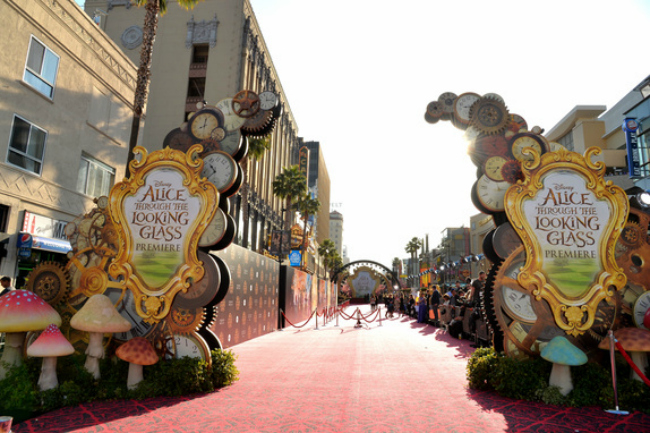 When the event started, I was able to spot a few celebrities based on the fans shooting their names. When Sacha Baron Cohen hit the red carpet, you could hear loud screams from fans and paparazzi yelling his name to get his attention. 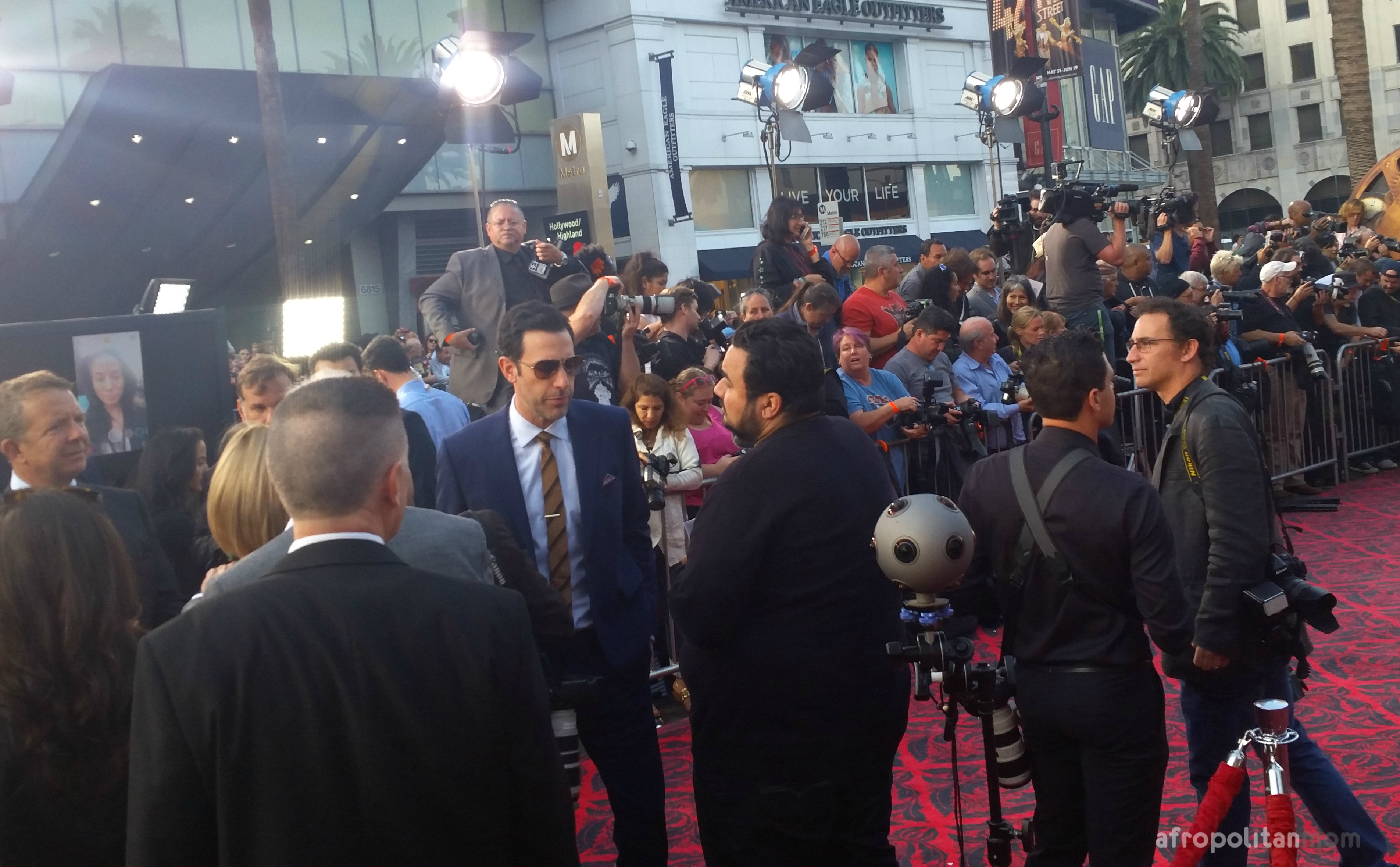 As I walked the scene, I realized that comfort is everything. Wearing a dress that you not only look good in but feel comfortable in, that way you don’t spend the whole night fidgeting. Although my outfit was okay, my shoe wasn’t the most comfortable; that’s lesson # 1. 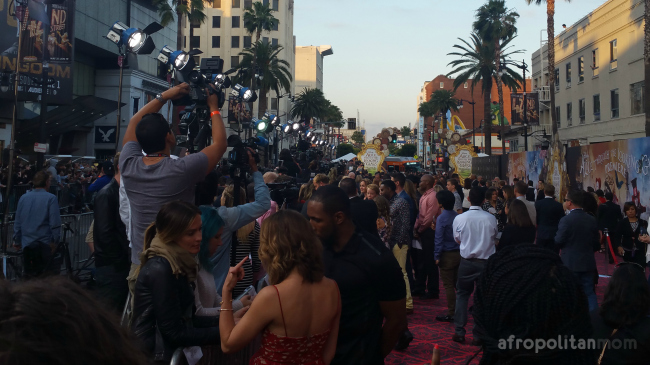 Lesson #2. Be present in the moment. Yes, although I was forewarned. I was still too busy trying to take pictures that I missed a lot of celebrities as they walked by me. Apparently, I was standing next to Jenna Elfman from Dharma & Grey, and I didn’t realize. Mel B, Erika Jayne, and a slew of others. I didn’t realize until, we got home that, the people in the picture above were – Allison Holker and “tWitch” the guy from so you think you can dance. We were walking the carpet but I was swamped with thoughts of, “I can’t believe I’m here” that I missed some precious moments. So much was going on in my head.

However, I saw a few familiar people but couldn’t place the face, but lo and behold when I googled the name it was Tammy Townsend from Family Matters.  She sat in front of me at the premiere. She had a small entourage and was quite pleasant. OMG, I had to come back and update this post, because my daughter just told me that Tammy Townsend is actually Kira Cooper, the mom on KC Undercover. She’s mad at me for not getting a picture with the cast of the show. 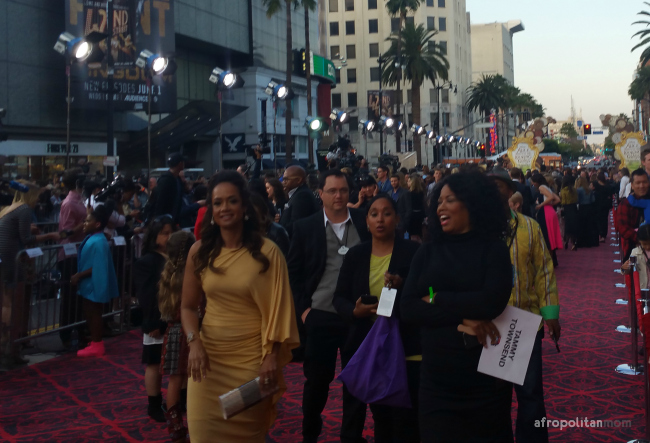 As we approached the end of the red carpet, I spotted Linda Woolverton. She’s the screenwriter of Alice through the looking glass. If you look at the picture below, she’s the one wearing blue, chatting with a few people. All around us were actors, producers, directors the movers and shakers of Hollywood. 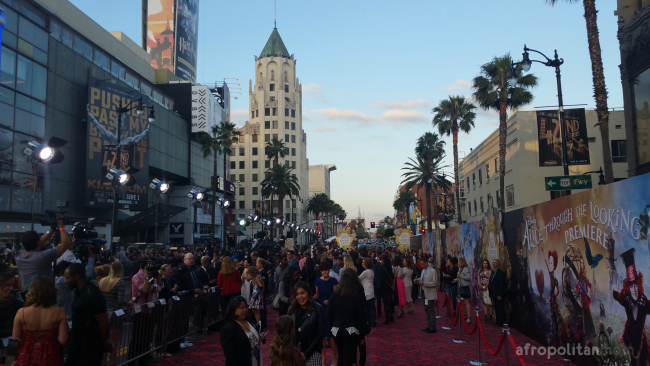 As we got to the end of the red carpet, the madness slowly died down, and we got a chance to check out some of the sponsors display.  HSN was on site showcasing their Alice through the looking glass exclusive collections. They had lots of beautiful pieces, bold statement necklaces, Alice-inspired clothing, home decor, and beautiful gold encrusted tea sets. 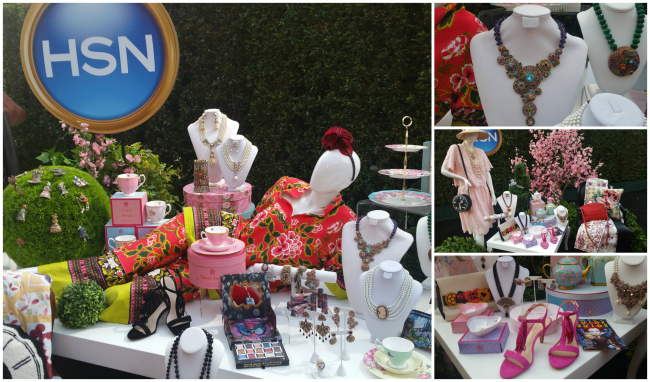 After that, we were ushered into El Capitan Theatre, where we watched the premiere. 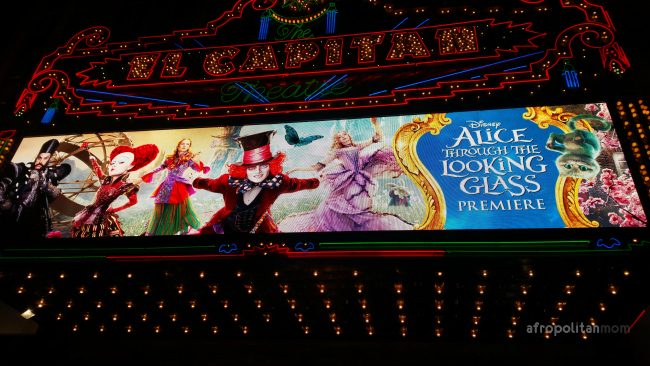 Although, I didn’t get to walk the red carpet with Anne Hathaway or Mia Wasikowska. I do however have a picture of Sacha Cohen and Johnnny Depp hugging it out on the red carpet. 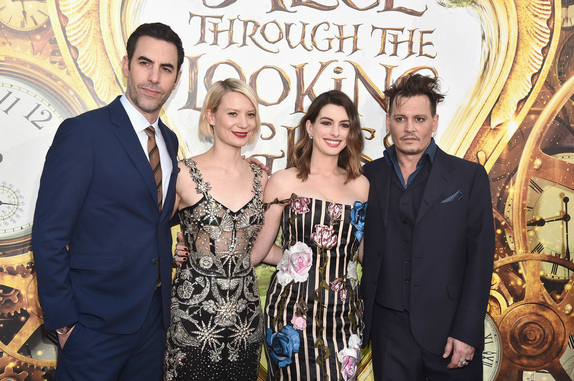 Overall it was an extraordinary experience, and the most important takeaway might be obvious, but it’s necessary – HAVE FUN!!!

Walking the red carpet is an experience; I will talk about for years to come because it was simply amazing. I mean seriously, being a mom from NJ and having to walk with celebrities I have watched on TV for years is beyond my grasp. I mean, there were celebrities all around me, and that right there is beyond my comprehension. I mean, I am not a star, yet I am on the red carpet strutting my stuff with all the A-listers. 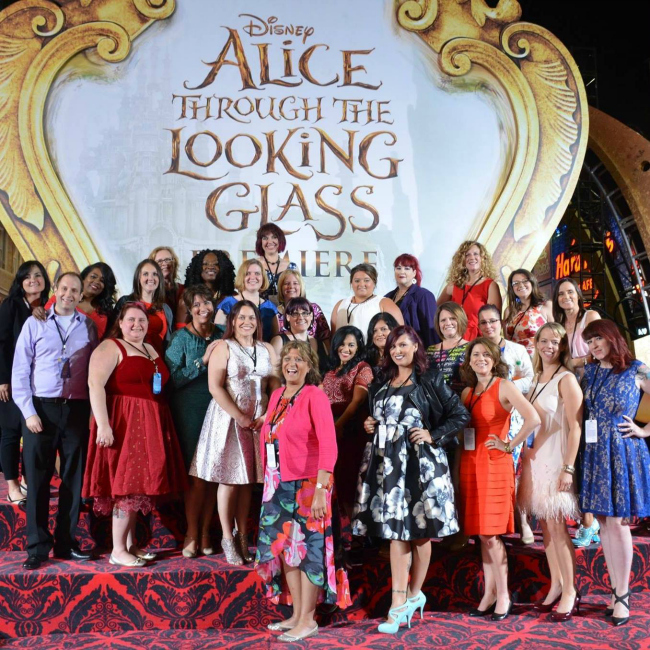 After the premiere, we attended an invite-only after party. 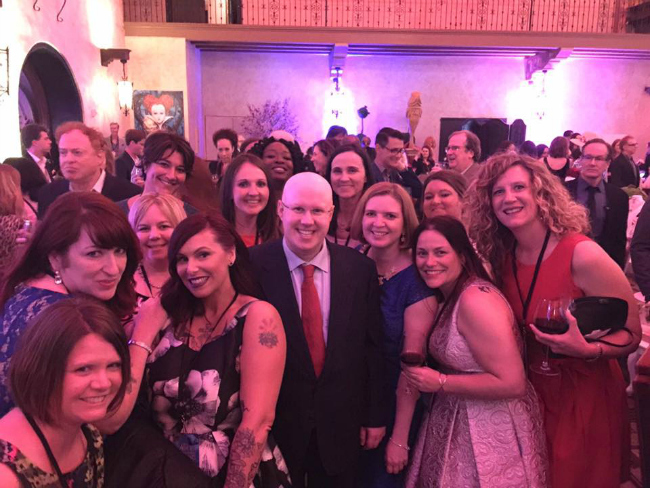 Photo by Rebecca Darling / R We There Yet Mom

While at the party, we had a chance to hang out with Linda Woolverton (the screenwriter),  Matt Lucas, he played Tweedledum and Tweedledee and Suzanne Todd (the producer) and she introduced us to her three kids. 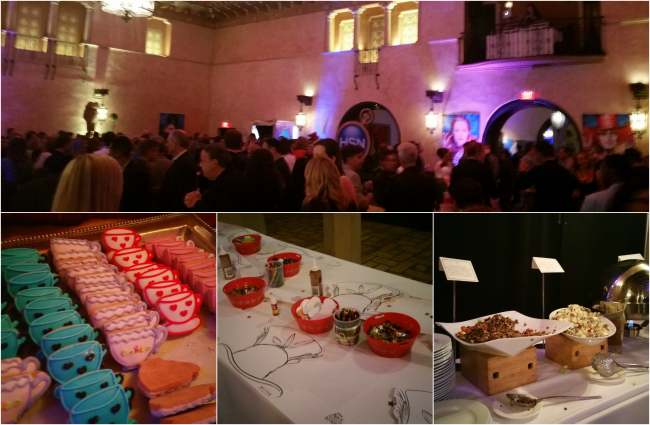 In a corner,  I spotted Sonja Morgan from Real Housewives of New York.  As I peruse the party, I couldn’t help but wonder, how many “Ari Gold” were at the party,  closing a deal or trying to get a clients’ movie off the ground. Living a glamorous life in Hollywood isn’t easy and being a part of it even if it’s just for three days is a blessing in itself.

Alice Through the Looking Glass hits theaters on Friday, May 27th

Disclaimer: Disney invited me to an all-expenses-paid press trip. However, all opinions are mine.