Thanksgiving is upon us and If football isn’t your idea of a good time, then you’re in luck. Netflix shared some of their Friendsgiving TV shows with us. Whats Friendsgiving, you ask? It’s a popular take on Thanksgiving when friends come together to celebrate good food and great company. So whether you’re spending the day with your family or friends here are 6 TV Shows To Binge Watch on Netflix This Thanksgiving. 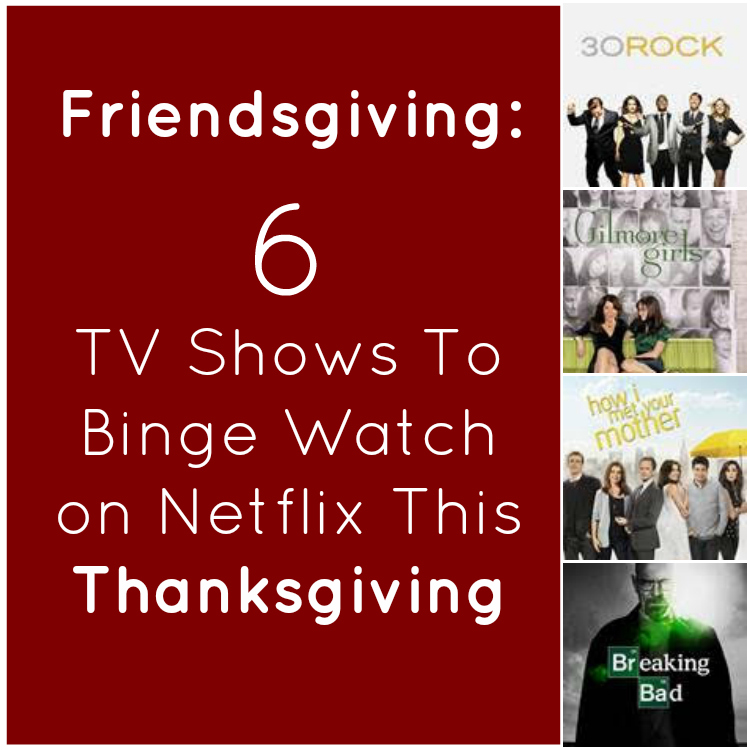 6 TV Shows To Binge Watch on Netflix This Thanksgiving

2. Schmidt and Nick: New Girl – TV-14
Still rebounding from a breakup, Jessica Day moves in with three single guys, all of whom are ready to help her understand the ways of the world.

3. Ted and Barney: How I Met Your Mother – TV-PG
Ted’s epic search for his soul mate is told largely through flashbacks, as an adult Ted recounts to his kids how he met their mother.

4. Liz and Jack: 30 Rock – TV-14
This smartly crafted sitcom follows Liz Lemon, an unlucky-in-love New Yorker who heads up a ragtag team of writers on a fictional NBC variety show.

5. Walter and Jesse: Breaking Bad – TV-MA
A high school chemistry teacher dying of cancer teams with a former student to secure his family’s future by manufacturing and selling crystal meth.

6. Mulder and Scully: The X-Files – TV-14
FBI agents Scully, a skeptic, and Mulder, a believer, attempt to uncover a government conspiracy to hide evidence of extraterrestrial activity.