March Madness 2014: Catch it All Now at BestBuy and @BestBuyWOLF #CatchItAll – Afropolitan Mom

Do you use Multiple Screens to stay connected during March Madness? Then you’re not the only one. Gone are the days when we can spend hours in front of the TV, catching up on the craziness that is March Madness. Seriously, with 2 kids that’s always vying for our time, its practically impossible to enjoy a decent game in front of  the HDTV without interruption. I’ve gotten quiet creative about it though.

March Madness 2014: Catch it All Now at BestBuy. 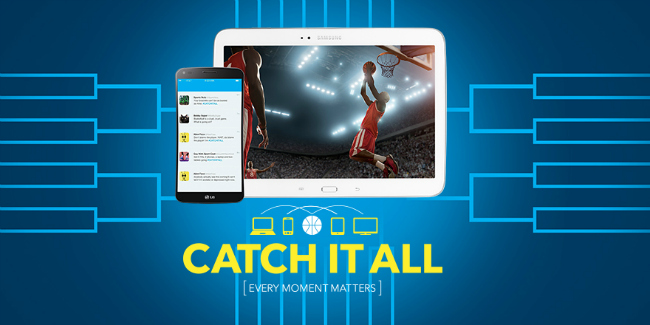 To help me stay in loop, I utilize my Samsung Galaxy Note 3 Cell Phone as a second screen so I can follow analyst and other sport enthusiast, like POTUS who congratulated University of Dayton on twitter after their upset win over Syracuse at the NCAA men’s basketball tournament.

Congrats to the @DaytonFlyers on a huge upset win! Devin Oliver, I may need to take you up on that pick-up game one of these days. -bo

It’s safe to say Devin Oliver just got an unofficial invitation to the white house.  The invite is well deserved though, Oliver scored seven points, ten rebounds, and four assists in the unexpected 55- 53 win over Syracuse. I am not sure what the future hold for Dayton but you can watch them play tonight against the Stanford Cardinal in Memphis.

Who is favored to win? I have no idea, it’s a tough call. The bigger question is, who are you picking to cover the spread Flyers or Cardinal?

Best Buy helps keep you connected to the excitement with the devices and connectivity that make it possible:  Brought to life by the brand promise of the latest devices and services, all in one place.

Disclaimer: The reviewer has been compensated in the form of a Best Buy Gift Card and/or received the product/service at a reduced price or for free