While shopping for school supplies for my daughter who is heading off to fourth grade, I noticed that her teacher requested a protractor. That only means one thing, in fourth grade she will be measuring geometric angles. I am a bit nervous about this. Even though I took advance algebra in high school, Math isn’t my strongest point. Which is why, in college I had to take calculus twice and it was probably one of the reasons why I switched my major from Computer Science to something that wasn’t math heavy. The reality is, struggling to pass calculus left a bad taste in my mouth. Luckily, my husband is pretty good at math, so I am hoping our girls inherited that from him. My less than stellar experience with math is why I am excited about the launch of Pixar in a Box.

Pixar in a Box Engages Kids in STEM Education

Pixar in a Box a new online resource that was created as a way to show kids how the concepts they learn in school are being used to tackle creative challenges faced during the making of Pixar films.

It’s a free online curriculum designed especially for students in middle and high school. However there are a few exercises for younger kids. Using a series of video lessons, interactive exercises, and hands-on activities, Pixar filmmakers shows us how they use science, technology, engineering, art and math to create new worlds, animate unique characters and tell stories through animation.

So if your eighth grader is wondering why she needs to learn linear functions, the interactive exercise breaks down how it’s being used in creating animation. Each lesson can be completed in less than an hour; and it offers hands on activity designed to help the kids apply the concept in real life. For example, one of the lessons asks the students to design and build a certain number of dinosaur parts in order to create a crowd of dinosaurs.

My girls are inquisitive so finding out the magic behind Brave and all their favorite Pixar movies is definitely something they would be interested in. It’s still pretty new so we’re in the process of familiarizing ourselves with the curriculum but I am excited to see how it all plays out.

Students can access Pixar in a Box and learn: 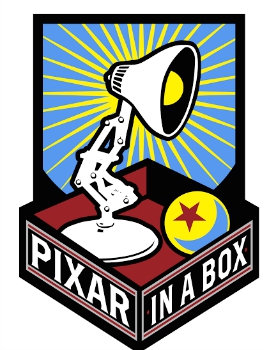