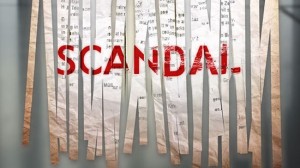 I don’t usually blog about TV shows I watch but the last episode of ABC Scandal left me wanting to share  a few things.  You’ve heard of the show Scandal right? Well even if you haven’t watched it, you’ve probably heard it mentioned a few times on your twitter or facebook feed. I can’t remember which one of my girlfriends introduced me to the show but sometimes I wish I wasn’t involve with it. I admire Olivia Pope, her confidence, her command of the room, the fact that her staff respects her, her whole team trusts her without hesitation, most of all because she’s a woman of color but at the same time I hate the fact that every Thursday night I’m glued to my TV rooting for a mistress.

I never liked mistresses – from the likes of Rielle Hunter, Angelina Jolie, Camilla Parker Bowles and Ashley Dupré just to name a few. I know some people say we shouldn’t blame the mistress while I don’t completely agree with that theory I understand their sentiment – no one can take away your man/husband without their consent – yes it takes two I get that but the mistress shouldn’t go unpunished. A few years ago I remember reading about a wife that sues her husband’s mistress for millions of dollars and guess what she won, I believe it was based on “Alienation of Affection” Law. Maybe if all states has this law some people will think twice about messing with the covenant of marriage.

As a married woman, the last episode of Scandal (A Woman Scorned) made me sad. I had to put myself in Millie’s shoes – the blatantly, constant disrespect was too much for me to watch. As I watched Fitz in disbelief, throw his life away for the woman he loves – his mistress, I can’t help but root for Millie (his wife). For the first time this season, I actually started to like Millie – the fact that she finally put her foot down – stood her grounds and went ahead with the press conference – to hell with it – “F” him. Well she didn’t say that but that’s pretty much how I felt. I am curious to see what will happen next week – my hope is that Millie stands her ground and just walk away from it all – sometimes a marriage isn’t worth saving especially in this situation. Fitz is gone, he has checked out of that marriage a long time ago and I believe if it wasn’t for his job he would have divorced Millie.

Anyway, I love the show but oftentimes I find myself thinking – I refuse to celebrate a woman caught in the midst of adultery, but then again I believe in the Mistress Karma – the way you got him, is the way you’ll lose him. Yes, I know its only a show I just hope there aren’t any women out there using this as their blueprint.